Last week, while the Presidential candidates were duking it out on stage in Colorado, another battle was waging behind the scenes on Twitter. During the debate, President Obama attempted to rebut Romney’s healthcare voucher program by analogizing a story from his dear, sweet grandmother’s life. Immediately, amongst the many people exercising their free speech rights on Twitter, someone posted: 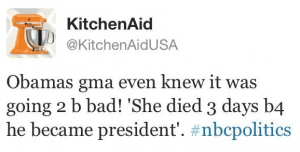 What normally would have been passed off as a tasteless joke by some rude Tweeter, received immediate attention from all. Why?? Because of the small detail that the tweet came from a well known brand that many mothers and grandmothers use on a daily basis….KitchenAid. Uh Oh.

It was quickly discovered that the person writing the tweet accidentally did so from the KitchenAid account and not from their own personal account. While the tweet was only up for a short time, it was there long enough for others to see, respond, and even page capture the image (as seen above). I am assuming that this employee is no longer with KitchenAid and definitely should not be anywhere near social media. The reality is that issues similar to these can happen with any company at any time.

In this situation, it appears that for the sake of KitchenAid’s brand name, there was a happy ending. As shown below KithchenAid’s response was timely, appropriate, and a model for how a social media crisis should be handled. 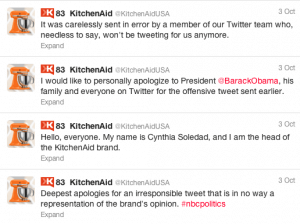 Cynthia Soledad, Senior Director of KitchenAid Brand immediately took the reins, accepted full responsibility, explained the situation and apologized to everyone and the offended (Mr. Obama) personally. She then sent numerous tweets to news outlets and invited them to contact her for further information and a statement. I am not sure if KitchenAid had a formal Social Media Crisis Response Plan in place, but it appears that they had planned for and discussed what they would do if a situation such as this arose.

How would your company respond if something like this occurred? Have you discussed social media crisis situations with your managers and employees? What type of Social Media Policy do you have in place to help prevent something like this from happening? Have you provided safeguards and educated your employees sufficiently to deter these types of social media faux pas?

Remember the old adage, if you fail to plan then you plan to fail. At Avalaunch Media we are experts in helping to protect your company from the pitfalls of social media misuse. For more information and to find out how you can start protecting your business, visit us at: https://avalaunchmedia.com/social-media-compliance