Well, look who became one of the internet’s most-hated women. I introduce to you Lindsey Stone of Plymouth, MA, who thought it would be gut-busting hilarious to be “loud and disrespectful” in one of the nation’s most hallowed ground, The Arlington Cemetery. 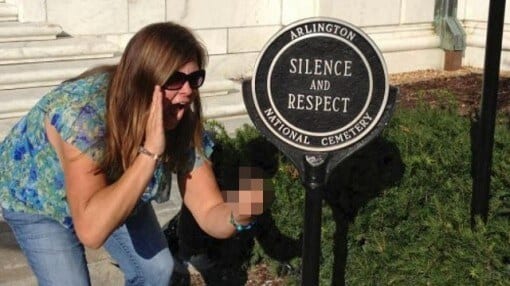 After taking this fine photo, she decided to post it on Facebook at the beginning of November for all the world to see because, hey, isn’t mocking dead soldiers funny? “Whoa whoa whoa…wait,” Ms. Stone wrote. “This is just us, being…d-bags…challenging authority in general. Much like the pic posted the night before, of me smoking right next to a no smoking sign.”

Well, it seems many thought there was a huge difference between a no smoking sign (probably in front of a 7-11) and a sign in a consecrated national cemetery duly reminding one of the blood and life that has been spent for your freedoms. As you can imagine, the photo went viral. A page called “Fire Lindsey Stone” was even created that quickly amassed several thousand “likes.” Ms. Stone was immediately put on unpaid leave by her employer and by Thanksgiving she was fired.

For the past week or so, many have cried fowl against Ms. Stone’s employer and have said that her behavior was protected by her First Amendment right to free speech. There have even been those that have said Ms. Stone’s employer was trampling on her Constitutional rights arguing that Ms. Stone should be able to say whatever she wants and no employer can do anything about it. Well, I’m not here to defend Ms. Stone’s behavior and, granted, it was probably not the smartest thing to post the photo for everyone to see, but those that are trying to defend Ms. Stone have somewhat of a misunderstanding of the application of the First Amendment.

Let’s look at what the First Amendment says regarding free speech, “Congress shall make no law…abridging the freedom of speech.” While originally applying to Congress’ law-making power, legal cases since the drafting of the Constitution have further interpreted this clause to apply to any federal, state, or local government. So, actions against free speech apply to the government only. Government is the entity that cannot punish someone for their speech.

So what does that mean for private employers? Well, generally (with some exceptions such as malicious or unequal acts) they can be free to fire an employee for the posting of inappropriate content online, whether it was done on or off the job. In the world of free market enterprise, this is a good thing. The Founders did not want to curtail a private entity’s power and ability to rid their company of someone that was damaging a brand or business reputation, or worse yet, leaking out important business data and trade secrets.  Ms. Stone definitely has the right to freedom of speech, but in this case that right should not shield her from her employer wanting to give her the ax.

Remember the old adage, if you fail to plan then you plan to fail. Businesses should always be prepared on how to deal with faux pas that may occur in social media and the internet. At Avalaunch Media we are experts in helping to protect your company from the pitfalls of social media misuse. For more information and to find out how you can start protecting your business, visit us at: https://avalaunchmedia.com/social-media-compliance.

29 thoughts on “Facebook Antics and Your First Amendment Rights”