Scott Brown, the former Massachusetts Senator, had a pretty interesting weekend…and for the rest of us, we still don’t know what happened.

Before the elections last year, it was quite apparent that most of Brown’s tweets were crafted and sent out by his staffers. However, after he lost the election to Elizabeth Warren, it seemed Brown’s twitter handlers moved behind the scenes and Brown was unfettered in sharing some of his personal pursuits. He let the world know he was at the gym, asked if anyone knew where “Petey’s” was, and let us know about his culinary delights at “Mul’s Diner.” There was really nothing of note that came out of Brown’s tweets from his personal activities…until last weekend.

On Friday evening around 6:00pm,Brown tweeted, “Yes. Get Ready” supposedly in response to the Democrat’s slogan, “Are you ready?” It was a cryptic tweet, which some construed to mean that he was going to go after the Senate slot made vacant by John Kerry’s appointment to Secretary of State. This caused the Twitter critics to come out against Brown, digging up old bones related to his campaign tactics.

Shortly after midnight Brown responded with this tweet: “Bqhatevwr” (and other short responses…see below) 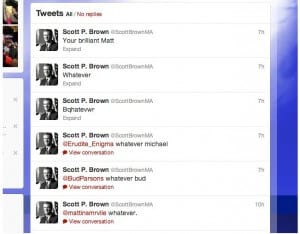 Shortly after this late night (early morning) exchange, Brown then deleted these responses and his Twitter page has been eerily silent with no explanation for what happened. This has led to many speculations as to what happened, with some going so far as saying Brown was a little tipsy and it was the alcohol speaking. Whether that is true or not, it seems that many anxiously await an answer on what Brown was doing and why he didn’t respond.

In a world where it is very difficult to “delete” any of your internet activities (especially if you are in the limelight), the worst thing to do is exactly what Brown did, which was delete and go silent. This, included with what was destined to become a meme and an instant hashtag (#Bqhatevwr), was a recipe for a PR disaster. 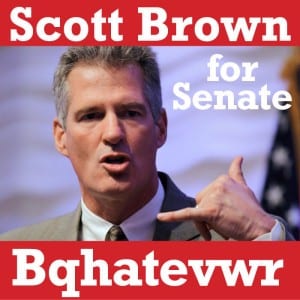 There are many lesson that can be learned from this experience, but I would like to highlight two here.

The FIRST is that if your image or brand is important to what you are trying to accomplish on a business, political, or any other level make sure your tweets and posts are vetted by someone who has a clue about image and brand management. I addressed this more in depth when discussing the Staffers Gone Wild (https://avalaunchmedia.com/blog/staffers-gone-wild-protecting-your-business-from-damaging-social-media-content).

The SECOND is if you do commit a faux pas on your social media account, have a plan in place to address it and do it as quickly as possible. People are usually more forgiving if you ‘fess up and admit your mistakes. If you delete and go dark, people are more likely to speculate, give more attention to what would have been a non-story, and wonder what you’re trying to hide. Mr. Brown could have easily made this story go away with a quick explanation that he may have been a little tired and responded from a quick late-night emotion. A good example of how a faux pas was addressed was KitchenAid’s recent social media blunder (https://avalaunchmedia.com/blog/kitchenaid-whips-up-a-good-social-media-crisis-response).

It will be interesting to see if Mr. Brown gives a response sometime soon, but if he doesn’t…bqhatevwr.

At Avalaunch Media we are experts in helping to protect your company from the pitfalls of social media misuse. For more information and to find out how you can start protecting your business, visit us at: https://avalaunchmedia.com/social-media-compliance

One thought on “Respond to My Social Media Faux Pas? #Bqhatevwr!”