This was the talk of the town today after the Technology  Q & A with Senator Orin Hatch and founder of Facebook Mark Zuckerberg.

Thanks to Jesse Stay, who got the whole thing on audio and reviewed it multiple times, this rumor is just that – a RUMOR. But you can imagine what it would have been like to have Mark reveal his secret to all his “Facebook Friends” in Happy Valley…

Anyway, now that we have that cleared up, here are some of the highlights of today’s conference: 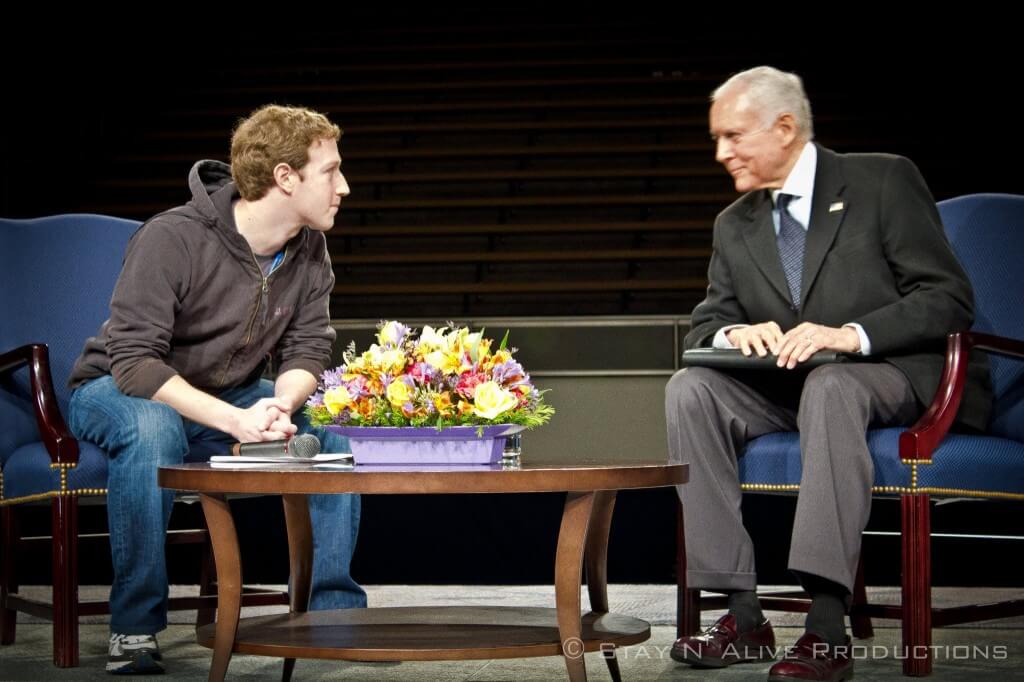 Orin Hatch: The main reason I invited you, Mark, is to get you to accept me as a ‘Friend’. Think of what you could have been if you would have come to BYU

How did Facebook get off the ground and has it turned out to what youve thought it would be?

Built first version as a sophomore at Harvard. I was quite certain we werent building a company. I built it because I wanted the product to exist at Harvard. We started getting requests from neighboring schoolsit kind of just got out of control from there.

At the end of my sophomore year I moved out to Silicon Valley, still not with a purpose to start a business.

If I were doing this again, I probably wouldnt choose Silicon Valley.

My girlfriend probably wouldnt be psyched if I move to Utah.

One thing that gets blown out of proportion is the emphasis of one single personthe success of Facebook is about the team weve built.

Weve focused at Facebook on keeping the company as small as possible. We service 500+ Million people but we only have 2,000 employees. Every person you hire has to be GREAT.

What classes would you recommend, the most beneficial classes to you?

I wasnt in school for that long 🙂

All of our problems are human problems  I was a double major in Computer Technology and Psychology.

Psychology and Sociology is a big part of what we do.

On Computer Science side, there are highly theoretical and the practical classes too.

What advice would you give to budding entrepreneurs?

You have to really love and believe in what youre doing.

Building a business is hard; you encounter a lot of challenges. If you dont completely love what youre doing, it becomes rational to stop it when times get touch.

A lot of the founding principles of Facebook deal with empathy, developing relationships, etc.

Its important, if youre going to take on any big challenge, is to have faith and a strong interest in what youre doing.

What does Congress and our Government think should happen with budding entrepreneurs on the Internet?

We havent over-regulated the Internet. I prefer keeping innovation alive.

Napster didnt have the basis that youve built at Facebook.

What is Facebook trying to do to promote a better development environment?

We want to make it so Facebook doesnt set up a situation where were the only ones who can build services and apps for Facebook.

A good independent entrepreneur or developer can usually do things better than a branch of a big company.

A lot of the specifics things people are going to build  were not going to be the best at.

Its humbling to see the success that a lot of people have had.

We want to make it so people can build things that will help long-term success and a much stronger eco-system of apps.

How can we maximize Internet potential while minimize the dark side of the Internet?

We offer extremely robust privacy controls. You can publish things that only certain people can see. More folks understand more now where there information is going. Theres a huge value in being able to share information like this.

We try to build a safe environment.

What other steps is Facebook taking on the security front to protect user data?

We are one of the first products that offer people the ability encrypted (https). This makes it extra hard for people to get access to the information to share.

If you login to Facebook from a new place, we want to make sure its actually you. Weve invented new security measures so we ask questions to verify you are the owner of your content.

Were always thinking about little and big things we can do to keep people safe when using our service.

How can technology help education?

The ability to spread information in a transparent way.

What do you think we should be doing for education?

What do you see as the roll of social media technology?

We believed that something like this would be built, we just didnt realize we would be the builders of it.

We thought a lot about giving people the ability to connect it ways they couldnt before.

You can now stay in touch with people in a more passive way  thats the basis of Facebook.

Businesses can now communicate more with their consumers. They cant really hide any more behind corporate walls.

Facebook and the Internet give people a voice to be heard where 20 years ago they couldnt.

Ask about the Church! someone yelled 🙂

What can BYU students do to get on Facebooks radar?

We look for people who are passionate about something. It really doesnt matter what  we just look for things people have shown initiative for on their own.

We dont sell any information  peoples trust is so important to us.

Yes, I was happy to be there.

Yes, the place was pretty packed (not as packed as if Jimmer would have been there).

And yes, Mark shared a few things that were worth taking notes for.

However, I left feeling like Orin Hatch made a good attempt yet FAILED at his political strategy of getting 18-25+ voters to re-elect him.

“I’ve had about 1,800 BYU girls contact me wanting to marry you…we Mormons don’t marry like that…” (paraphrased)

“We’d sure love to have you move out here to Utah.”

and finally, when ask a political question by Mark:

“Blah, blah, blah, a new bill here, a program there, and…But I just really respect and admire what you’re doing for the Internet.” – SERIOUSLY?

The best props I can give to Mr. Hatch is that he got Zuck here. It was a fun experience.

What questions would YOU have ask Mark Zuckerberg?