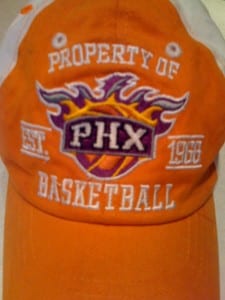 Suns are now using Social Media
This year the Suns have given me one more reason to brag – they have actively incorporated social media into their company marketing strategy. Many of you know that Shaq’s on Twitter, but did you also know that the Suns have hired a full time Director of Digital Media? Amy Martin, known by Tweeps as @PhoenixSunsGirl, has the full time responsibility of making sure that the Suns are successfully using social media. Amy is the lady responsible for helping Shaq work on his Twitter game. So all of you Tweeps who follow Shaq (currently more than 33,000 of you) can thank Ms. Martin for the opportunity to connect with Shaq online.

ROI in Social Media
The Suns are finding ways to turn these Twitter fans into paying Suns fans. In fact, recently they held a “Tweet Up” which allowed Suns Tweeps to show up before the game to watch the team warm up, enjoy a Q & A with GM Steve Kerr, and mingle with the Big Aristotle himself. (You can find video from the Tweet Up off the Suns homepage). More than 125 Tweeps showed up for the event. In other words, more than 125 people spent an evening at the Suns game… and what does a night at an NBA game cost? My experience has been any where from $50 to $300 depending on where your seats are, what you eat and drink, and whether or not you take home any souvenirs. So let’s say each of the 125 fans spent an average of $100.00, that is nearly $13,000.00 in revenue. Not to mention, that many of those fans will have a great time and therefore be back for more down the road. While that is chump change for an organization like the Suns, it does serve as an illustration for other organizations as to how they can find ROI from social media.

What can you learn from the Suns using Twitter?
I love to share examples like this with potential DSM clients, because today’s average business owner has no idea how social media will transform into a better bottom line. It is up to us Internet marketers to show them – recently I wrote a post describing how restaurant owners can use social media to bring in more patrons. The Phoenix Suns example is just one great illustration that almost any business owner can identify with.

4 thoughts on “Social Media Case Study: Phoenix Suns making the most of Twitter”