I was recently informed that a Utah real estate company that we consult, Uncle Sam’s Land, is donating an actual property from their portfolio for the upcoming silent auction “Love for Nie Nie.” That is an inspiring donation and reminded me that we can all do something of the like!

I am sure many of you are aware that in August of ’08, Stephanie and Christian Nielson, and their four children (all under six years of age), were in a private plane crash in Arizona. The flight instructor was killed, Stephanie and Christian were both in critical condition, and Stephanie’s sister took in the children. The ‘blogging world’ really reached out to both the Nielson family and Stephanie’s sister in the form of support and donations. And now the “Love for Nie Nie” auction and benefit concert is being held February 2nd, 2009 at the Covey Center for the Arts in Provo. Here are the details: 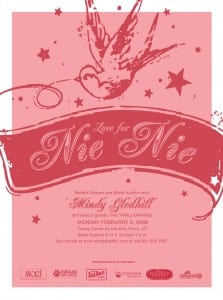 Mindy Gledhill with The Thrillionaires
Monday, Feb., 2nd, 7:00 p.m.
The Covey Center for the Arts, Provo, UT
Buy tickets at www.coveycenter.org or call 852-7007

Discounts available for students, seniors and groups of 6 or more

Silent Auction Info:
Auction has started at www.formerlyphread.blogspot.com
Online bidding ends Feb. 2nd at 3:00 p.m.
The ending bids will be the starting bids for all of these items at the live auction which begins at 6:15 p.m. in the Covey Center lobby and ends after the concert

Some highlights from the auction include two packages to see the Jazz on the second row, including dinner and parking, valued at $950 each. There’s also, a basket full of makeup by MAC valued at $600.00, and a private, acoustic concert with Mindy.

So, follow the suit of companies like Uncle Sam’s Land and get involved. Not only is this a great way to do something charitable with your resources, but it is also a great PR move. And there is nothing better than doing the right thing and growing your business at the same time!