Valentine’s Day is this week and brands are showing the love already. It’s time for romantic stories to make the front page of Reddit and HARO pitches about relationships. As a social media marketer I’m on the hunt for the perfect Valentine’s Day social media campaign, here are a few favorites.

Tweet ‪#‎ILoveYouLike‬ to @evianLoveBot and they’ll respond with a Valentine’s message, like the one below, to share with your sweetheart (until February 16th). Except when we tried it we learned @evianLoveBot got suspended, so just use the hashtag and cross your fingers!

To make it fun there will also be fun prizes.

This one isn’t backed by a brand but is still an example of stellar storytelling. Anyone can create a picture of a candy heart with their own offbeat wish and share it with the hashtag. What’s great about this one is that it’s become a tradition. Brands put a lot of work into campaigns, why not make one like that can be recycled? 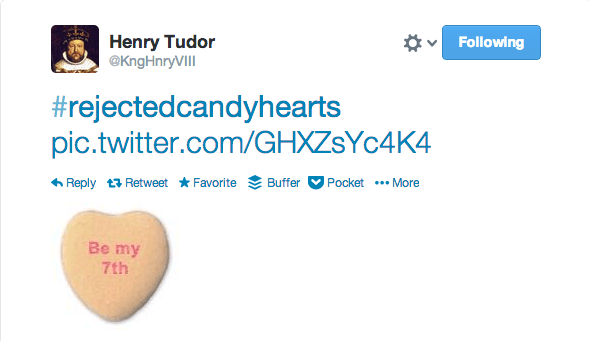 For two years in a row, DegreeSearch created their own nerdy Valentines. They are so well done they could literally be printed off and handed out.  last year we created 3 posts of Nerdy Valentines. I reached out to Joseph LeBaron to get more details. “We decided to break the posts up into series of 5 images. The first one was received so well immediately that we kept it going.”

Notice the number of pins, there was definitely love from Pinterest. This makes sense also because women are more likely to talk about Valentine’s Day and according to data from Pew research, women love social media more than men, and it’s especially noticeable on Pinterest.

Here are the numbers:

Milk-Bone chose 10 bloggers who love animals to make Valentine’s Day crafts using the dog treats and display the project on their blog. In addition the bloggers helped spread the word about contests. There was a Twitter party too. Specially marked boxes of Milk-Bone biscuits have a special red dog bone that says “LOVE” on it and a code. You enter the code on a landing page and if you’re lucky you could win a year’s supply of Milk-Bone biscuits plus some cash.

5. Nutrimill Bosch for the love of whole grain Facebook giveaway

This one could be adapted to love for just about any brand. It’s fairly simple and runs for a week even though there is just one big prize. Each day there’s a new finalist and one of them wins a NutriMill Grain Mill on Valentine’s Day. To enter, they ask a lot. You have to LIKE their page, comment on the posts about the contest, like the post, and SHARE the post. It’s working at driving engagement though, with an average of over 64,000 people reached per day.

They feature the day’s finalist on an image about the contest, which personalizes the contest and gives them another chance to remind people to enter.

This is our favorite Valentine from @jessmisemer – it’s the perfect compliment for any marketer or PR pro: