Interview with Bing and Google via Suggest

After a recent conversation with Mat Siltala touching upon the accuracy of Google Suggest, we’ve decided to go straight to the source and interview both Google Suggest and Bing Suggest.

Uh… In Spanish? …Bien, Gracias. Bing, how are you?

Well Bing you seem to have a lot more to say. I hope you are not trying to compensate for something else here. I must admit, I am really excited for this interview today. Are you excited?

Not sure why you are on this Spanish kick Google. Excited for school? No. Excited for Christmas? Well who doesn’t like gifts…. uh don’t answer that. Bing?

Interesting, not much to say here from Bing. I didn’t mean to scare you about saying too much.

The question your Search audience is really wondering:

Why are Google Suggest, or Google Autocomplete, and Bing Suggest so different? Granted we understand that Google has ~65% of the search market-share, but even at 10% Bing should have enough numbers that statistically the results should be similar. Bing your thoughts on Google.

I am a little surprised that Bing would admit that “Google is better than Bing.“ It seems that if Bing were trying to manipulate the suggest that they would have removed that suggestion. Google do you agree with Bing on these? 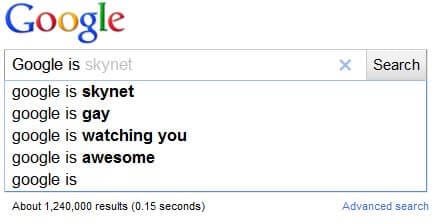 Well, it seems you have your differences here. But again, I see that Google is not removing “Google is gay, and Google is Watching you“ from their suggest. That adds a little trust to the suggest. Although Bing does believe that “Google is Evil.” Overall it seems that this may just be a question of user demographics. Oh.. Sorry Google. Let’s give you a chance to respond on Bing.

Good questions Google, what do you think?

Well I must agree that  Bing is not Google. But Bing is better than Google? Oh I see, your follow up in the results sticks it to them. Well at least more than half the page seems to be in your favor.

Well I think less on the suggest here would have been better for you Bing. Don’t be so hard on yourself, granted Bing is a stupid name. I mean do you really expect someone to say, “Go Bing that?” But it seems both you and Google think of yourselves as awesome. Could that be a manipulation of the suggest tool? So lets ask some simpler questions.

Very little agreement there between Bing and Google. Simpler?

There seems to be a few more “gay” suggests in Google.  And “Is there mail on Veterans Day?” Well, that sounds like a senior citizen question. I am going to have to go with the difference is based on age demographics. I mean “Shingles” Bing? Not a very young trendy crowd you are hitting with that one.

It seems neither of you care much for Twitter. What about politics? Do you agree on Obama?

Hmmm… Obama is a cactus? Now that was a little uncalled for.

Amazing how each of you suggest that Obama is the antichrist. I never took you for God fearing search engines.

Not sure where Bing pulled out the great Beer. I mean how many people are searching for “God is great beer is good people are crazy”? That didn’t even show up in Google Suggest. Well since we have covered most of the do not ask questions in civil conversation, religion and politics, let’s try getting some real answers. Answers that Matt Cutts won’t even give us.

What does Google Suggest about SEO?

Well thanks for telling us how you really feel.  Bing?

????…. Oh, the politically correct response. Or is that “If you can’t say something nice then don’t say anything at all response”? Come on you’ve got to give us something.  What does Bing suggest about SEO?

Well it seems you have a little common ground on this one after all. Although these suggestions do seem to have a little bias in them. Hard to say really.  Can I dig a deeper and get some comments on Black Hat?

Yes, Google.  Black Hat SEO.  Maybe I should have been more direct.

Smart move Bing, give us as little to work with here as possible.

Bing Suggest- Max of 8 suggestions per search. But some searches don’t use the max.

Google Suggest – Max of 4 suggestions per search. And Google always wants to suggest 4 and on as many terms as possible.

It seems that Google and Bing only agreed on top two most searches in “How are you”. They matched the top search on three other occasions “Facebook is down”, “Bing is Not Google”, and “SEO is DEAD”.

Per this interview Bing also seems to carry a shorter cache on their suggest, “Veterans day, and Dancing with the Stars.” But perhaps a more aged crowd as well.

-Thomas Ballantyne
Director of Marketing for Bulwark Exterminating
AKA… @Thos003

21 thoughts on “Interview with Bing and Google via Suggest”