Are You A Rattlesnake Neighbor?

I was thinking about my old town (which happens to be owned by the Government now – seriously no kidding, look at the picture) and some of the neighbors I grew up next to.

The reason I started thinking about this is because I was trying to compare it to what kind of a neighbor I am in life, and especially online.  It begs the question: What kind of a neighbor are you? I had some fun responses on Twitter about bad neighbors too, that I wanted to share:  Thanks @Rhea, @MollerMarketing and @ArnieK for your responses! 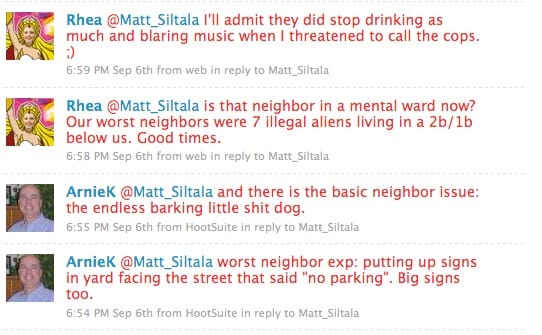 I shared a story on Twitter about how the worst neighbor my family had growing up would always put dead rattlesnakes on our doorstep to try and scare us.  Many many times it worked, but the shock factor eventually wore off and it became annoying and we paid no attention (and never became good friends).  Can you see where I am taking this?

To make online communities work for you, you have to get noticed yes, but are you taking the wrong approach?? (aka my neighbors rattlesnake approach?)  Here is the problem with taking the rattlesnake approach – you can do things for “shock” factor to get yourself noticed, but how long is that shock factor going to last?  The sad thing is you could eventually end up being a good friend, but if all you do is put rattlesnakes on my door step then eventually I am going to get bored and stop being your friend.

It also gets me thinking about what might have happened if a LIVE rattlesnake ever ended up on my doorstep and caught me off guard because I was so use to the prank (and didn’t pay attention).  I would have missed something important, and that would have been BAD!  What if these same people online share something amazing, but you never notice it because of their past history of being idiots?  It might actually be something worth checking out, but you would never give them the time of day, and that content would never get viewed.

Learn how to be a real neighbor

Don’t be annoying: Treat people how you want to be treated.   Like the golden rule is “do unto others as you would have them do unto you”, the Platinum rule would be “do unto others as you would want them to do unto you!” If you want people to share your content, link to you, talk about you, ask you for help – then you better be doing that as well!  You can’t just offer up something shocking, and hope that people continue to follow you in all your communities – you have to be real and engage with people.  Let people know your likes, dislikes; help them get to know the real you!  You don’t have to agree with everything that everyone does all the time, but find some common ground and build on it!

I have had some of the best neighbors (offline) these last two years that were NOTHING like me, but we have found common ground, we listen to each other, let each other share whats on their mind, and we help out wherever we can.  Its amazing to me that more don’t get this simple rule to being social, but then again I guess there will forever be those “rattlesnake neighbors” around!!

2 thoughts on “Are You A Rattlesnake Neighbor?”