Is Perry taking our advice about social media when a conversation turns negative? Doesn’t really look like it. Here’s what he had to say today:

While Perry has largely avoided questions on the subject, he told reporters in Iowa on Friday he does not consider Mormonism a cult.

And his campaign released a statement Tuesday in response to Romney’s comments vowing Perry would keep his focus on jobs and the economy.

“Mitt Romney’s comments are a distraction from the fact that Romneycare served as a blueprint for Obamacare,” the campaign said.

Avoiding the topic or changing the topic is NOT how to handle a conversation that turns negative in social media.

Man, I’ve never been an Anderson Cooper fan, but he completely demolished this guy that called Mormons a “cult,” and wiped the floor with him. It’s hilarious! (From the Facebook video description – which has since been taken down – go figure)

This was the description of a Facebook video, originally viewed on CNN with Anderson Cooper, that has gone viral and is being talked about all over social networks.

Here’s what just a few of my Facebook friends had to say: 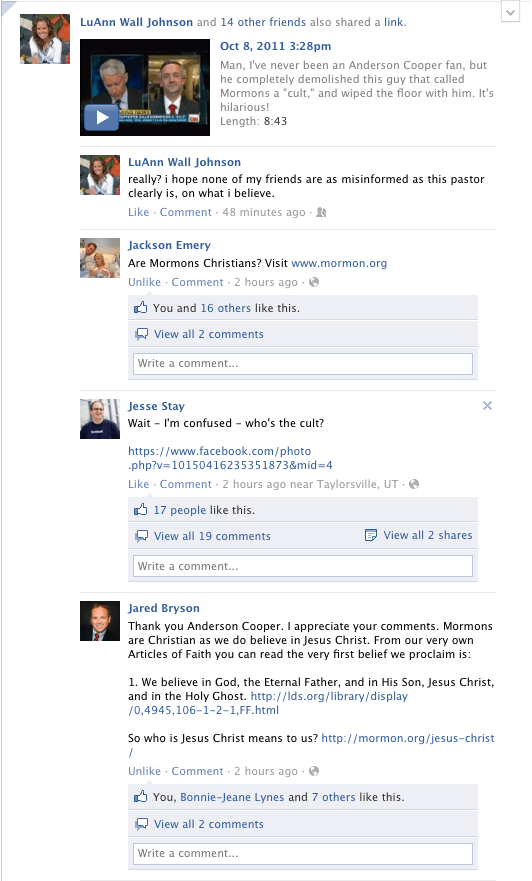 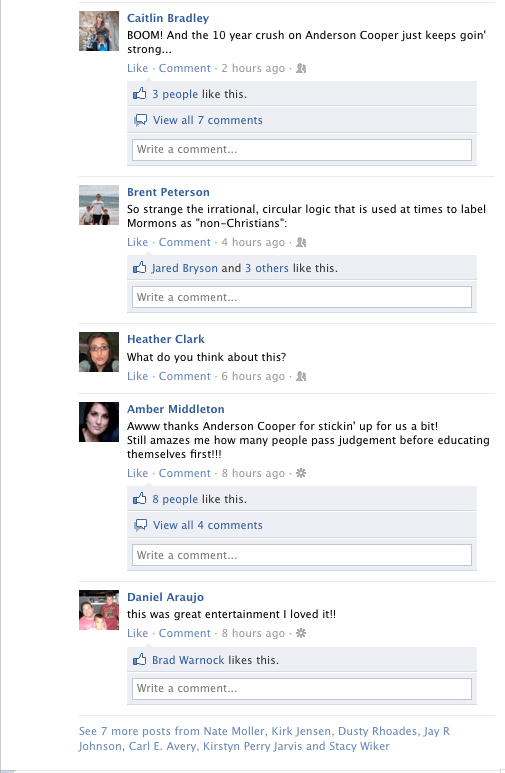 No, I haven’t really done any additional research on Pastor Robert Jeffress (nor do I plan to waste my time doing so).

But, as Anderson Cooper stated a couple times in the final questions: “Don’t you think a stand like this will only hurt Perry’s chances for the Presidency?”

Just from my Facebook friends alone, there were at least 197 mentions of this video within a couple hours.

I’m sure most of us know the potential Facebook has for sharing content all over the world. But do Pastor Jeffress or Governor Perry really understand the power of social media and reputation management?

Not only did Jeffress slam the Mormon faith, of which there is a strong following and support in social networks, but he also went on to basically slam all other religions that don’t follow his practices. And all this in an effort to support his politician of choice? Really?

Other Highlights of the Interview

Pastor Jeffress: When I talk about a cult, I’m talking about a theological cult as opposed to a social cult…(although he never explained the difference)

Pastor Jeffress: And we could get into an in-depth theological discussion and put everyone to sleep out there (Anderson interrupts)

I was happy to see articles later this evening, some event written by Evangelicals, that took a stand for members of the Church of Jesus Christ of Latter-day Saints (Mormons).

The 4 Social Media Takeaways for Protecting Your Online Reputation

Take time to think things through before you blast away, especially if you’re talking about things that are near and dear to potential voters hearts. Jeffress should have asked himself these important questions before saying a word:

It appears to me that he didn’t ask himself ANY of these questions or he’d be “repenting” for all the fluff he said.

2. Listen to Your Audience

I wonder how this all ties back to Governor Perry and his run for the Presidency?

Interesting point: If you go to Pastor Robert Jeffress Youtube account, he’s turned off all comments, all likes and dislikes. Isn’t that ironic with social media? Does he really WANT to know what other people think and feel or is he all about his own $ocial agenda$?

What will you do if people write nasty things about you, or even worse, an issue explodes that could deliver a devastating knock-out blow to your business, or in this case, to Rick Perry’s presidential campaign? It appears Pastor Jeffress plan is to just turn off all comments, ignore the negative, and keep getting TV spots to make more of a fool of himself.

If you want to do social media the right way, the most important thing to do when and if you receive negative feedback is to respond as soon as possibleand thats true of almost any online channel.

There is nothing wrong with admitting a mistake or apologizing. Most people will stick with you if you work to make things right. Rick Perry has had one of his representatives make a comment – but if he really wants to win back votes he should take a stand himself.

What are your thoughts on this bad PR stunt for Rick Perry by Pastor Robert Jeffress? How do you feel it will effect his online reputation (if he had one to begin with)?