Recent and Upcoming Changes to Yelp

Yelp is changing their website, they no longer have a review filter!!!

If you scroll to the bottom of a Yelp Business Profile page one you will find this new statement:

So that grayed out section that reads “196 other reviews that are not currently recommended” is now the new link to the reviews Yelp is hiding. Very subtle change, but “reviews that are not recommended” sure has an undertone  to it.  The good news is, NO MORE CAPTCHA! That’s right, they do now allow you to click right on through with no further barrier. And when you get there: 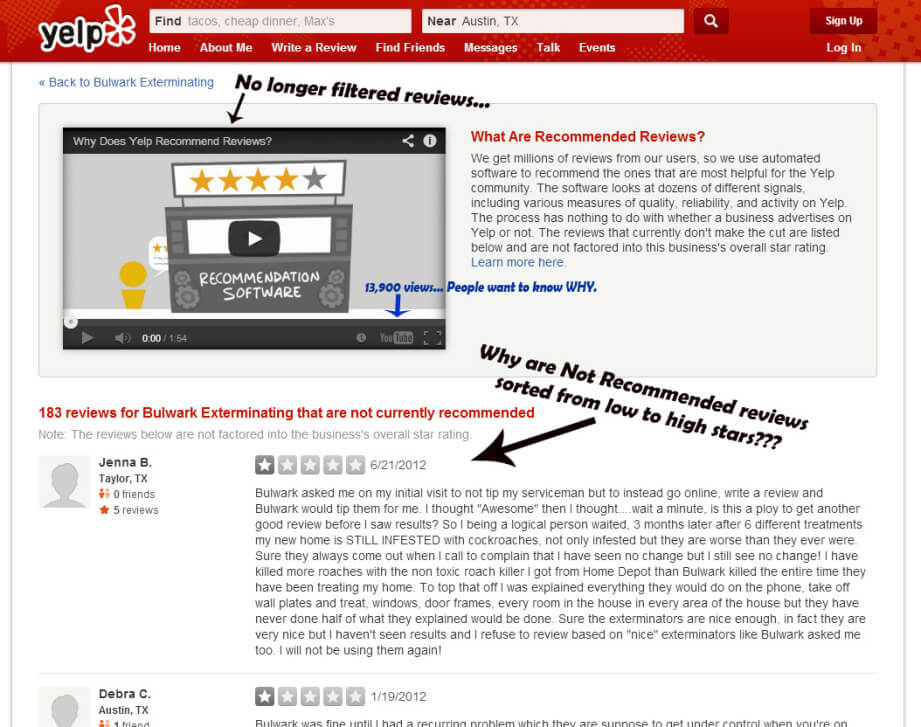 Searchers of hidden truths will now see all the negative reviews that are “not recommended” as the lowest star reviews top the not recommended list. I’d love your thoughts on why Yelp sorts these reviews from low to high. I am undecided on whether they want to further punish businesses or if they are trying to make complaining owners see that they are first filtering the negative reviews. You will also note that the filtered review stars are all grayed out. They don’t get the normal happy bright Red, orange, or yellow stars. No colors, obviously these reviews are different. Clearly they are not important and deserve no attention.

But despite all the time and energy they have spent on “re-branding” the Yelp review filter, the filter is unchanged.

Yelp also at some point prior to these recent changes removed the ability to click on the users found in the “Not Recommended” section. Thus preventing any searchers of hidden truths to scrutinize the reviewer. Much harder to complain that Jill’s reviews are being filtered in one location but not in another. 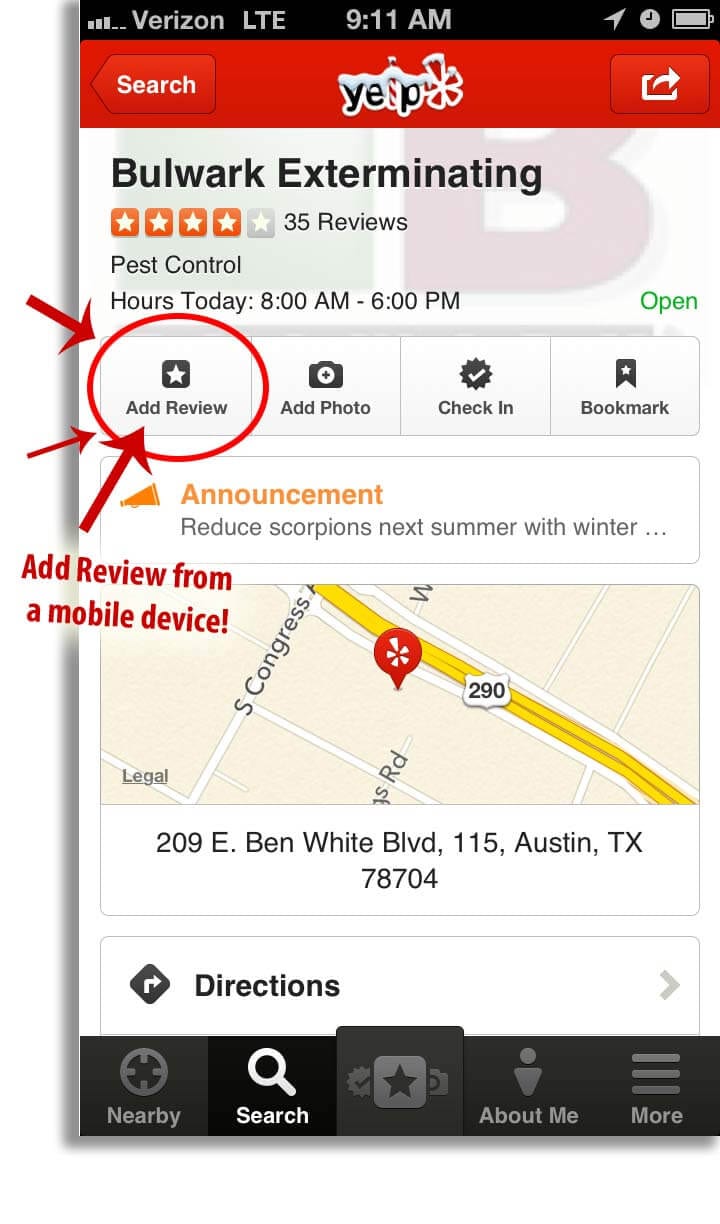 It would appear that Yelp has turned a new leaf here. They are now allowing users to write reviews through their app and from mobile devices. This was unheard of in the past as Yelp was leery of  business owners providing incentives for Yelp reviews. So the Yelp App in the past simply allowed you to write and store the review for later. Then once back on a desktop computer you could submit your review. Although, if a user really wanted to leave a review they only needed to use their internet browser on their device to do so in the past.

Yelp is also testing and will soon be rolling out a new layout. If you are one of the lucky 1%, then you will see this layout when you visit yelp. Or you can just append “?nb=1” and see it live now 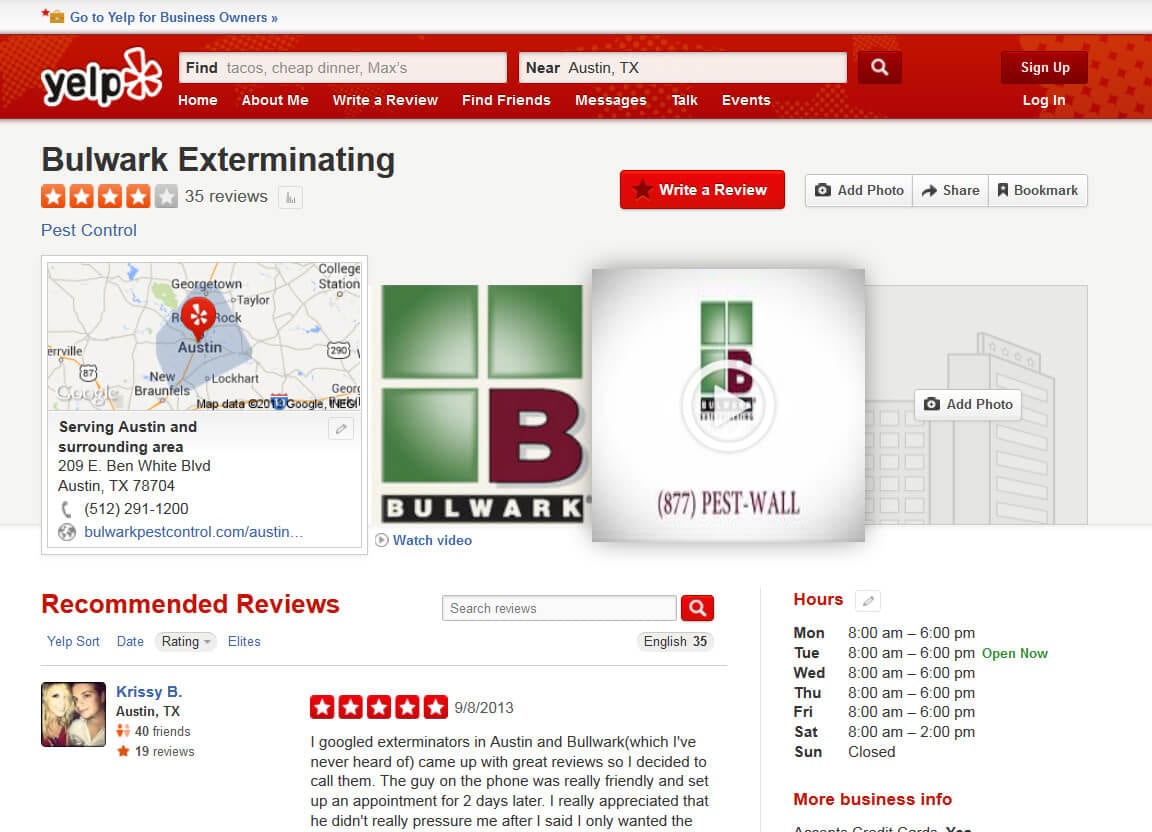 Compare to their current and soon to be outdated version: 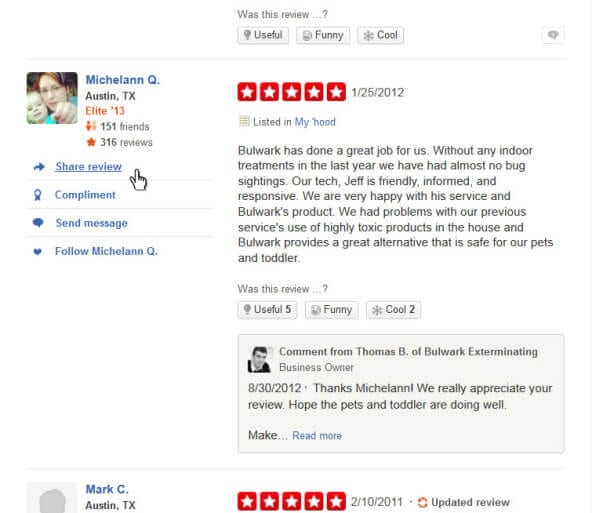 Want to flag a review? Not going to happen. Yelp removed the option to flag reviews! Also noted is the reviews themselves are a little different. They’ve moved the interactions with a reviewer to the left, to fall under the user’s name and only upon mousing over that area.  Minus the cons listed above, overall it’s a good design. (UPDATE: As of 20/01/2014 YELP has added back in the “report review” button on their new design.)

So let’s go back to this new video they’ve released and talk about a few misleading statements. Rolling the highlight reel.. 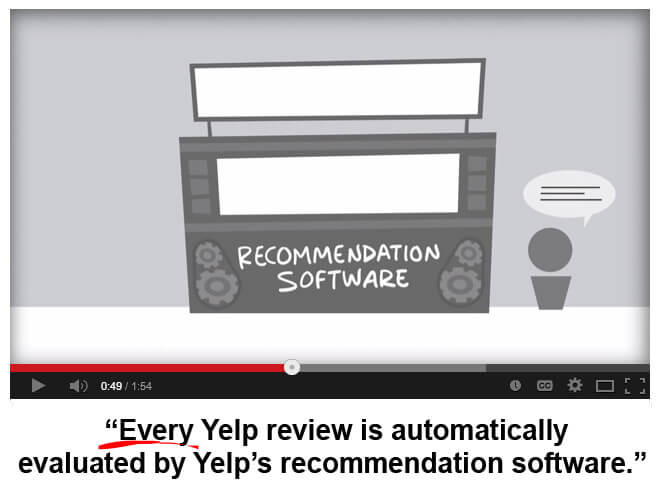 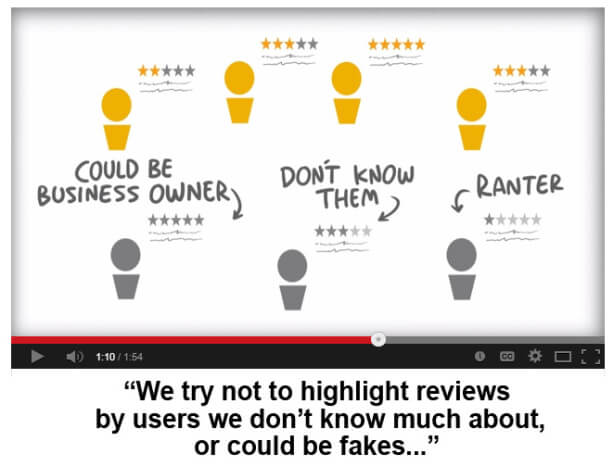 Yelp’s new youtube video has been viewed now over 14,000 times, and it was just launched on Nov. 13th. That is a lot of visitors still curious as to why Yelp is hiding reviews. The crux of this video is that the majority of the video is spent on explaining why certain users are trusted, and others not. If this filter were a user based system then why does a user’s review count for one business and not another? If the user is the one being censored then why do some businesses experience a review filter ration well above the 34% mentioned in the video? If it has to do with Yelp trusting a user then why does a review of “Nick B.” remain recommended  even when Yelp Elites in Austin deem the user to be a fake.

If Yelp believes they are being honest about a review filter based on trusting users with a mere admission of “We try.” then they are further from the truth than I anticipate. Yelp’s “Recommendation Software” is more heavily biased on a business by business bases. Need proof of this? Try testing their system. Take the exact same 5 star review from a zero friend no face one review user that is not filtered on one company, and apply it to a second company that is being heavily filtered. The 5 star reviews are immediately snatched away. Yet duplicate a 1 star review from a no face no friend user that is filtered on another company and apply it to a heavily filtered company… amazing how that review slips un-restrained by the “wh0-can-we-trust software”. To clear this up even more, if you take a raving 5 star review that was filtered, change the review stars to a 1-star, same raving content, the 1-star review does not get filtered. If these tests hold true then it would seem that yelp is simply filtering these reviews by the rating, not by the content, not by the user.

Well at least they admit that it is a “TRY”. But the effort or lack thereof in that “TRY” is astonishing.

It is even more irritable, when breaks in the system are reported and nothing is done about it. My Yelp sales rep Zack’s excuse, “Well we get millions of reviews. We can’t catch them all and we admit that.” True, we certainly have evidence that you can’t catch them all, but when it’s reported to you and someone must look at it… You should be able to catch those. Yet the response I got was a typical stamped corporate response. And upon turning in a spreadsheet that clearly and unmistakably unmasks some SEO companies that are cheating the system and using fake reviewer profiles, my sales rep says, “Well we don’t want to delete users. Yelp doesn’t want to discourage users. …We do filter most of their reviews anyways.” What? Why would yelp allow fake user profiles to remain? Does it have something to do with the YELP stock ticker? Does someone believe that Inflating user numbers is good for the value of your business? They are not users. They are abusers of Yelp. They are FAKE accounts. It is about time you kill those pests.

Make it a great day!

3 thoughts on “Recent and Upcoming Changes to Yelp”