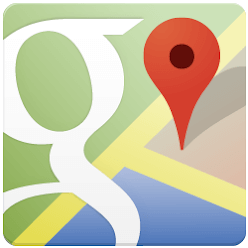 Earlier this week Google Maps rolled out their new Favicon. The added “g” is perhaps an effort to further brand their maps section. But perhaps the most iconic portion of the maps, the red pin, remains the same. The blue portion of the map in the image seems a bit off, as water doesn’t typically get blocked into a street corner. The new favicon follows the pattern of their new “g” favicon (

) for google itself. Similarly the “g” is displayed in the Google+ Favicon (

). These three favicons are the only Google properties currently supporting the little “g”

What does the new favicon meeeeeean?

Well perhaps the most important developments in Google right now surround GoogleMaps, Google+, and Google Search. Although the blue “g” favicon is shared across many of google’s properties, and isn’t specifically unique to Google Search. Or perhaps, it’s just an little thing that is intended to bug a pest control guy. Really, any meaning added to the recent changes in Google’s family of favicons would be purely speculative.

You may now pay your respects to the late Google maps favicon.

My most recent history with the Google Maps Favicon.

And “Ado” to the multi-color Google favicon…